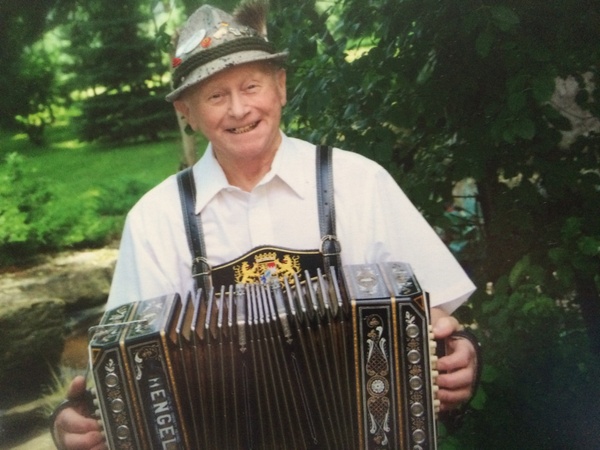 He was born on July 26, 1930, in Lebanon, son of Fred and Jueinitta (Stark) Neuman. He was united in marriage to Lucille (Dins) who preceded him in death in 1969. He married Evelyn (Schwarze) on January 19, 1974 at Immanuel Lutheran Church. Carl proudly served his country in the U.S. Army during the Korean War. He just returned from the Badger Honor Flight. He was a member of the Immanuel Lutheran Church and dedicated usher. He was employed as a tractor mechanic for a local John Deere dealership for over 35 years (the best John Deere mechanic in the area)! He loved to play his concertina and entertain the crowds. He was the number one fan of his great grandchildren attending their baseball, basketball and softball games. He was their number one fan. Friday night fish fries were first on his agenda for the start of the weekend. MJ’s will miss him! He was an avid fisherman and never kept a trout that wasn’t a premium prize. He was an excellent car mechanic as well as tractor mechanic. Carl was an active member of the American Legion (past commander), Veterans of Foreign Wars, Fond Du Lac Area Musicians, American Legion Honor Guard and the Waupun Volksfest Committee. He received the Distinguished Service Award from the Wisconsin Polka Hall of Fame, and was appointed to the World Concertina Congress Hall of Fame. He enjoyed being with family, playing the concertina, & trout fishing on the Mecan, the meanest stream around. He played concertina for special events, weddings, annual family reunions, assisted living centers, and Senior Centers. He loved German festivals and attending grandchildren and great-grandchildren’s Christmas programs.

In addition to his first wife and parents, Carl was preceded in death by an infant son, Charles Neuman; his brother, Marvin Neuman; a sister, Erna Uecker; his brother-in-law, Orlando Uecker; and a great-grandchild.


Friends and relatives of Carl Neuman may call on the family on Tuesday from 4-7 p.m. at the Werner-Harmsen Funeral Home in Waupun and on Wednesday at the church from 9:30 a.m. until the time of service.


Funeral services for Carl Neuman will be held Wednesday, December 17, 2014 at 10:30 a.m. at Immanuel Lutheran Church in Waupun with Rev. Elizabeth Lee officiating.

To order memorial trees or send flowers to the family in memory of Carl Neuman, please visit our flower store.