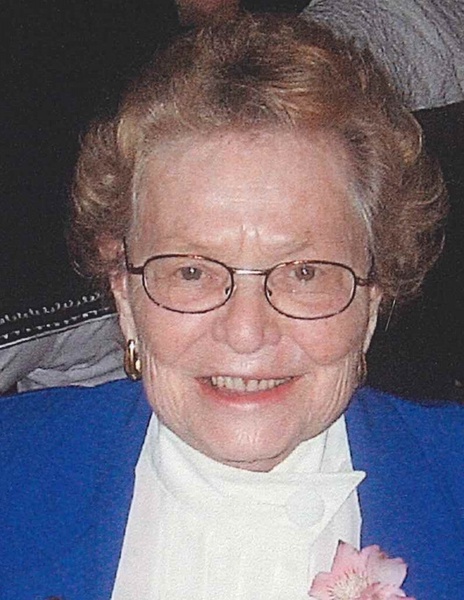 
Beatrice Toomey Geisthardt, 90, formerly of Oakfield, passed away peacefully on May 17, 20017 at The Christian Home in Waupun.

Beatrice was born February 13, 1927 in Oconomowoc, WI to Owen E. and Gladys (Mills) Roberts. She graduated from Oconomowoc High School in 1945. In October 1951 she married William Toomey in St. Louis. Following their marriage the couple moved to Oakfield where they resided during their married lives. Bea was employed at Mercury Marine in Fond du Lac for 18 years, retiring in 1983. On October 15, 1982 she married Calvin Geisthardt in Oakfield. Bea and Cal resided in South Byron until Cal’s death on October 9, 1989 at which time she moved to Waupun. Bea was a member of St. Joseph’s Catholic Church in Waupun and a member of the Waupun Memorial Hospital Auxiliary. Throughout her years, Bea enjoyed golf, bowling, flowers, traveling, and her kittens.
Beatrice is survived by her four children: Patty (Jerry) Hoppe of Ocoee, TN, Mimi (Ken) Hoekstra of Waupun, Dan Toomey of New Berlin, WI, and Sally Toomey (Scott Hendrix) of Houlton, WI; 10 grandchildren: Mitchell Hoppe, Amelia (Derrick) Crouchet, Emily (Pete) Whyte, Kurt (Kimberly) Hoekstra, Kyle Hoekstra, William Roberts, Evan Roberts, Jay Roberts, Kathleen Toomey, and Sarah Toomey; and great-grandchildren: Trinity Graves, Dayton, Connor, and Abby Whyte, and Eli and Evelina Hoekstra.

She was preceded in death by her parents; husbands: William Toomey and Cal Geisthardt; sister, Kathryn Roberts Sigafus of Mankato, MN; and brother, Walter Roberts of Oconomowoc, WI.

Friends and relatives may call on the family at the funeral home on Friday from 4 p.m. until the time of service.

Memorial services for Bea Geisthardt will be held Friday, May 26, 2017 at 6 p.m. at Werner-Harmsen Funeral Home in Waupun with Rev. Dennis Overlien officiating.

Inurnment will take place at Salem Cemetery in Wales, WI.


To order memorial trees or send flowers to the family in memory of Beatrice Geisthardt, please visit our flower store.