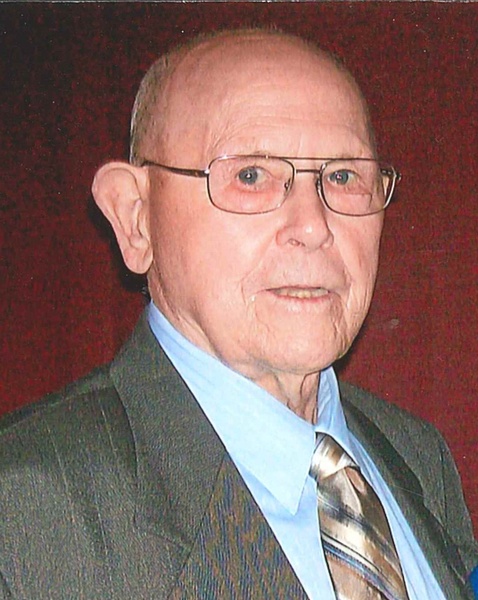 
Bernard Vossekuil, 96, of Beaver Dam, passed away Saturday, November 28, 2020 at Prairie Ridge in Beaver Dam where he resided.

Bernard was born May 21, 1924 in Brandon, WI the son of James and Anna Redeker Vossekuil. On October 25, 1945 he married Erna Vande Slunt at Bethel Reformed Church in Brandon. Following their marriage the couple started dairy farming in the town of Chester. They retired from farming in 1987, and then he worked at Waupun Feed and Seed in Brandon for 20 years. He was a member of Grace United Reformed Church in Waupun, and prior to that served as an elder and deacon for a total of 20 years at First Christian Reformed Church in Waupun. Bernard served on the Waupun Christian School Board for several years, board of directors of Flyway Mutual Insurance in Waupun, and served on the building committee at Grace United Reformed Church.

Bernard was preceded in death by his wife, Erna on September 19, 2018; two sisters: Orlene Smits and Ardis Vosskuil; and his brothers, Henry Vossekuil and Lloyd Vossekuil.

The family wishes to thank Prairie Ridge Assisted Living and St. Croix Hospice for the wonderful care given to Bernard.


To order memorial trees or send flowers to the family in memory of Bernard Vossekuil, please visit our flower store.