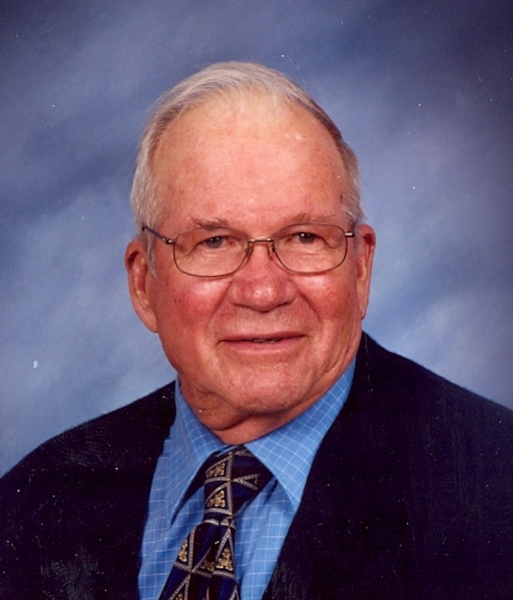 
Chuck was born May 5, 1919 in the town of Springvale, the son of Peter and Tena Wallendal Vellema. During WWII Chuck served with Company “L” 47th Infantry 9th Division in the European, African, and Middle Eastern Theater. After four years of service, three of them overseas, Chuck was honorably discharged on July 18, 1945. For his participation, Chuck was awarded many honors including five Bronze Stars and the Purple Heart. On August 4, 1945 Chuck married Nova E. Wagner in Brandon. Together they owned and operated a dairy farm in the town of Waupun. She preceded him in death on July 18, 2009. He was a representative of the Waupun Farmers Mutual Insurance Company, and served as treasurer for the town of Waupun for over 40 years. He served as Grange Master in the Rising Sun Grange, and was a member of the Agricultural Stabilization and Conservation Service. He served on a committee in the building of Amity School. Chuck was a member of Union-Congregational Church in Waupun where he was a deacon and a trustee. Chuck was a member of the American Legion Post 210 and Disabled Veterans. In 1965 he was chosen as the Waupun Chamber of Commerce Father of the Year. Chuck enjoyed traveling, having driven to most of the states as well as visiting Alaska and Canada. He was an avid Brewers and Packers fan. He liked to tinker and there wasn’t anything he couldn’t fix. He was always willing to lend a helping hand. Chuck was a hard worker who truly loved family and farming and the simple pleasures that country life afforded.

Chuck was preceded in death by his parents; his wife, Nova; and a grandson, Zac Hoogstra.


Friends and relatives may call on the family on Wednesday at the church from 9:30 a.m. until the time of service. American Legion Post 210 will provide military honors.


Memorial services for Chuck Vellema will be held Wednesday, April 23, 2014 at 11:30 a.m. at Union-Congregational Church in Waupun with Rev. Jack Kraaz officiating.


The family requests memorials be directed to American Legion Post 210 in Waupun or Union-Congregational Church in Waupun.

To order memorial trees or send flowers to the family in memory of Chuck Vellema, please visit our flower store.