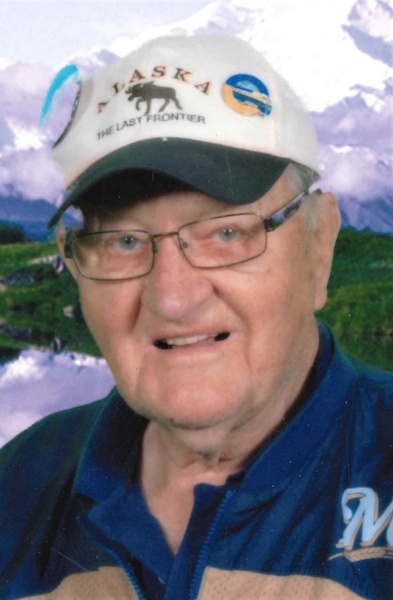 Clem was born on Dec. 9, 1926 in Nichols WI to Clemens and Gertrude (Schreiber) Hoelzel. He spent his formative years in the Nichols/Chilton area playing baseball and raising rabbits with his younger brother, Howard. Clem's family moved to Greenleaf, WI and he attended East De Pere High school where he met Helen Falck, the love of his life, in choir.

After graduating from East De Pere High School in 1944, Clem enlisted in the Navy in July spending two years as a radio engineer. He was honorably discharged in July 1946. Clem and Helen married on May 20, 1950 in Waukesha WI. They soon moved to West Bend, WI where Clem sold Kirby vacuum cleaners door to door and played softball (his passion) five nights a week. Clem then began employment with Gambles Hardware, spanning a sales career of over 35 years, managing stores in Janesville, WI and Knoxville, Iowa. In April 1964 Clem and Helen purchased the local Gambles Store from Mrs. Al Little and moved Barbara, James and Sally to Waupun WI.

Clem and Helen taught their children the importance of service and hard work, by example. Clem was an active member of the Lions Club, Waupun Historical Society and Waupun Chamber of Commerce, serving as President and on various committees. He represented Dodge County on the Dodge County Tourism Council and would travel around the state with Helen promoting the local area. They often talked of these experiences and the lifelong friends that they met along the way.

After selling the Gambles Store, Clem continued to sell appliances and furniture over the next 13 years, first at Tempo in Fond du Lac and then at Woolco in Beaver Dam. In 1983 Clem opened TRC (The Realty Company) and conducted home energy inspections. Since he had a little more free time, Clem and Helen took up bicycle riding along country roads. They would pack the bikes and sleeping bags in their conversion van to stay in State parks. Bike racing then followed. Clem would travel to Fond du Lac, Ripon and even Milwaukee to ride in sanctioned races. He would boast about being one of the oldest racers.

Upon his retirement from TRC, Clem continued his commitment to service running for supervisor for Dodge County. Over 15 years, he would continue to be reelected and only resigned at 89 at the urging of Helen as the committee meetings were held at night in Juneau.

Over almost 60 years in Waupun, Clem channeled his baseball passion into coaching Waupun Little League, was an active member of St. Joseph Catholic Church serving on the Parish Council, rising to the rank of 4th degree in the Knights of Columbus, committed to American Legion Post 210 serving as treasurer for many years and always supporting fundraisers including brat frys. Clem was honored in 2009 as Veteran of the Year.

There was always time for music in the Hoelzel household. Clem was self taught on the harmonica, banjo, and ukulele and entertained many a crowd with his Stumpf fiddle. And we can not forget his love of the Green Bay Packers and the Milwaukee Brewers. He was more than happy to give a tour of his "Packer room" to anyone who asked. Traveling to out of town Packer games, Brewer bus trips and Spring training were highlights. Clem even got a passport at age 92 to travel to Alaska and Vancouver.

Special thanks to the staff at Prairie Ridge and Heartland Hospice.

Memorial contributions can be directed to Knights of Columbus, Waupun Council 4897 in Clem’s name.

To order memorial trees or send flowers to the family in memory of Clement Hoelzel, please visit our flower store.