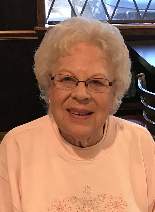 Delores was born March 23, 1932, the daughter of August and Adele Jahns Belau. On August 12, 1950 she married John E. Guth in Waupun. The couple resided in Waupun and helped operate the family’s candy and soda fountain business, The Trojan. It later became known as Guth Candies. In 1978 the business was sold and the couple moved to West Allis, WI where they lived for 20 years. Delores was employed by Taitelman Furs in West Allis for 17 years. John died in 1992. Delores returned to Waupun in 2000. She was a member of St. Joseph’s Catholic Church in Waupun, the Waupun Hospital Auxiliary, and The Waupun Arts Council.

She was preceded in death by her husband, John; a son, Joey, in 1965; two brothers; and two sisters.

Friends and relatives may call on the family on Wednesday at the church from 9 a.m. until the time of service.

In lieu of flowers donations can be made to the Waupun Hospital Auxiliary.


To order memorial trees or send flowers to the family in memory of Delores Guth, please visit our flower store.