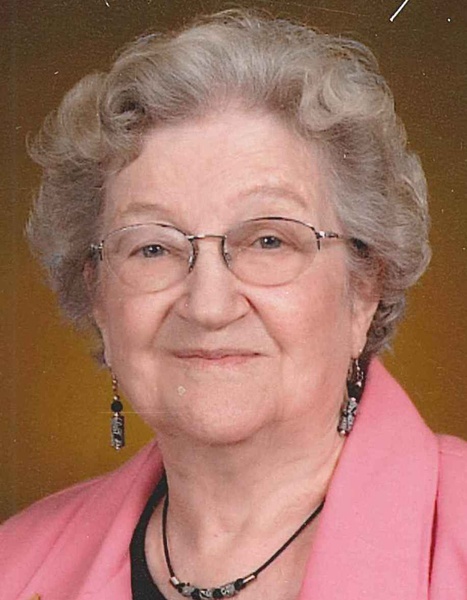 Donna was born July 12, 1928 on the family farm near Melrose, Wisconsin, to Orley and Gladys (Stoker) Sims. She attended the West Indies School, but in the 4th grade transferred to the Town Creek School. Donna graduated from Black River Falls High School in 1945, where she was involved in Choir, Band, and was a soloist with the Blue Baronets dance band. Following high school, Donna attended secretarial school in Minneapolis, where she worked for her room and board. Back home, she did bookkeeping for a local veterinarian and hardware store. In September of 1947 Donna married Calmer Overlien at Little Norway Lutheran Church in Black River Falls and they began life together on the Overlien farm in Irving. Donna was kept busy over the years, tending four sons, as well as helping on the farm and serving as organist at Little Norway Church. The Overliens moved to Elmwood in 1959, where Calmer became licensed pastor of the Elmwood and Rock Elm Methodist Churches. They remained there seven years, during which time Calmer earned his college degree and then completed schooling at Northwestern Seminary in St. Paul. Donna gave piano lessons, having as many as 30 students at one time. Calmer and Donna went on to serve churches in the New Lisbon-Necedah-Camp Douglas charge, Forest Junction-Rural Brillion charge, Our Master’s Madison and Mondovi-Gilmanton. While in New Lisbon, daughter Kari Beth arrived and completed their family. Calmer and Donna often sang duets and as the children grew, they joined in. Known for their excellent performances, they recorded an album titled “The Parsonage Family”. In 1989, Cal and Donna moved to their log home near Black River Falls and stayed involved in ministry at their church during retirement. Donna enjoyed many volunteer activities through UMW, Interfaith Volunteer Caregivers and Memorial Hospital Auxiliary. In 2003 Donna was honored to receive the “Jackson County Women in History” award. Donna lived out her unshakable faith in her Lord and Savior Jesus Christ. She served the church and supported her husband’s ministry, she created a warm and happy home, and she taught her children to love Jesus. She was so very proud of her 5 children and their spouses, 16 grandchildren, 25 great-grandchildren and 2 great-great-grandchildren.

Donna was preceded in death by her husband, Calmer, in 1996; her parents; a sister, Marion Kersting and brother-in-law, Harold Kersting; and an infant son, Chris Eric.


A private family burial will take place at Little Norway Lutheran Church at a later date.

To order memorial trees or send flowers to the family in memory of Donna T. Overlien, please visit our flower store.