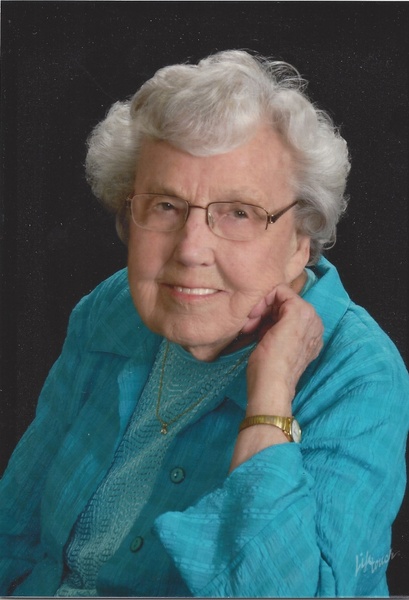 Edna graduated from Waupun High School in 1938. She then attended Oshkosh State Teachers College (now UW-Oshkosh), where she received her teacher’s certificate. She taught at rural one-room schoolhouses in the Waupun area until starting a family. She later also served as a substitute teacher in the Waupun school system.

She married Leonard Beske on June 22, 1946. They enjoyed many family activities, including camping and time at their lake cottage for many years. She loved hosting game nights with family and friends.

Edna was a longtime member and participated in many activities at Pella Lutheran Church. She directed the Adult Choir, the Bell Choir, was an organist, and directed many choir concerts at the church. She was a Lutheran Women’s Missionary League President and Ladies Aid President. She also served on the Waupun Memorial Hospital Auxiliary and served as President. Many knew Edna for her 40+ years serving on the City of Waupun election board.

Edna is survived by her children – Alan (Venice) Beske of Hawk Springs, Wyoming, Dale (Dorothy Gertsch) Beske of Verona, Wisconsin, Carla (Howard) Hansen of Detroit Lakes, Minnesota, and Craig (Barbara) Beske of Maplewood, MN. She also is survived by two grandchildren, Robert (Elisabeth) Hansen, and Carolyn Hansen, all Fargo, ND, and two great-grandchildren, Zachariah Hansen and Taylor Hansen. She is also survived by her brother, Oris Possin of Waupun; a niece and nephews; and step-grandchildren.
S
he was preceded in death by her husband, her mother and father, her mother-in-law and father-in-law, one brother and two sister-in-laws.

Friends and relatives may call on the family on Thursday at the church from 9 a.m. until the time of service.


Funeral services for Edna Beske will be held Thursday, March 24, 2022 at 11 a.m. at Pella Lutheran Church in Waupun with Rev. David Knuth officiating.


Memorial contributions may be directed to Pella Lutheran Church in Waupun.

To order memorial trees or send flowers to the family in memory of Edna Beske, please visit our flower store.