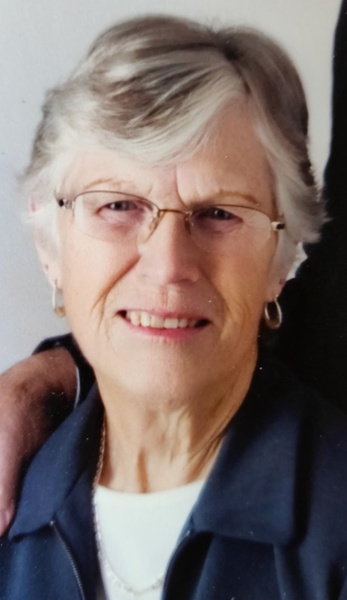 
Elaine Catherine Karberg Huizenga, 85, of Waupun, went home to be with Jesus her Lord and Savior on April 27, 2019 after a life filled with countless blessings.

Elaine was the daughter of Fred and Catherine (Newenhouse) Karberg, born on November 16, 1933 in Sioux Falls, SD. The Karberg family moved to northern MN when Elaine was in middle school, and there she graduated from Park Rapids High School in 1951. After graduation, Elaine moved to South Holland, IL where she met the love of her life, Theodore Huizenga Jr. After first spotting Ted at church, and then again at a roller rink, Elaine took advantage of a lady’s choice skate to get to know him. They were married March 10th, 1955 at Bethany Christian Reformed Church, South Holland. In 1965 they moved their family to a home west of Waupun. There they continued to raise their five daughters. Elaine spent her time managing the home and children and was an active member of Bethel CRC of Waupun. After the girls were grown, Elaine returned to the workforce in several capacities including Kelly Temp Services and Kondex Corp. Throughout their years together Ted and Elaine enjoyed exploring this beautiful country as well as Europe, Canada and Mexico. However, their best times were spent holding hands while watching TV. They lived by the motto “We are so Blessed” to express their contentment with the life God had granted.

Friends and relatives may call on the family on Wednesday at the funeral home from 9:30 a.m. until the time of service.


A funeral service for Elaine Huizenga will be held Wednesday, May 1, 2019 at 11:00 a.m. at Werner Harmsen Funeral Home in Waupun.

The family would like to thank the staff at Prairie Ridge Assisted Living, Hometown Hospice, and Jan Drews for their loving care and kindness.


To order memorial trees or send flowers to the family in memory of Elaine Huizenga, please visit our flower store.