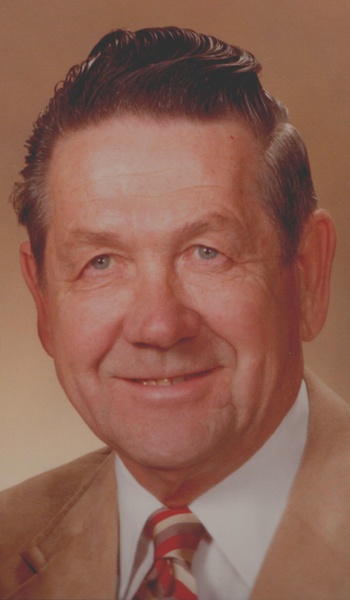 
Elmer was born October 20, 1915 on the family farm, the son of Gustav and Matilda Beck Possin. He graduated from Waupun High School, was the sole surviving member of the Class of 1934, and played sousaphone in the band that won the national band competition in Chicago. He married Helen M. Peachey on February 14, 1940. They resided in Burnett until moving to Waupun in 1963. Elmer was an advocate for education for a quarter of a century, serving on boards of education for the Burnett, Horicon, and Waupun school systems. Elmer was a Packers fan since 1927 when his family bought its first radio. He attended his first game in 1933, regularly attending games for 70 years. Elmer and Helen shared a love of travel, beginning with a 3 week car trip to the Florida Keys for their honeymoon. This continued over the years as they traveled and stayed overnight in every state but one. They also shared a love of golf, playing the Rock River CC golf course together for over 60 years. He continued in his professional insurance career until age 70 as he found so much enjoyment working with his coworkers at EMC Insurance in Brookfield. The joy of his life was his wife, Helen, their three children, six grandchildren, and two great-grandchildren.

He was preceded in death by his parents; and two siblings, Alice and Chester.


The family expresses deep gratitude to the staff of Oakwood Village University Woods, especially the 3rd floor staff of Tabor Oaks and Agrace Hospice for their caring assistance and support.


In lieu of flowers donations may be made to the Oakwood Foundation or the charity of your choice.

To order memorial trees or send flowers to the family in memory of Elmer G. Possin, please visit our flower store.