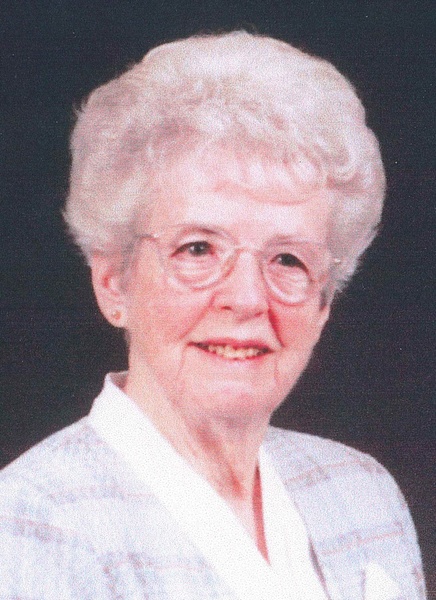 Emmeleen Mezera was born June 24, 1919 in Hillsboro, WI the daughter of Edward and Lena Olwell Conway. Emmeleen was a graduate of Hillsboro High School and continued her education at St. Catherine College in St. Paul, MN where she received her Bachelor’s Degree. She taught at schools in Minnesota and later in Prairie du Chien, WI where she met her husband, Howard Mezera. Emmeleen and Howard were married in Prairie du Chien on July 28, 1947 and resided there until 1959 at which time they moved to Fox Lake. Emmeleen taught a knitting class in Fox Lake, ran a floral shop for a few years, and enjoyed playing cards wherever and whenever. She enjoyed sewing and making quilts. Emmeleen was a very active member of Annunciation Catholic Church in Fox Lake.

She is preceded in death by her husband, Howard Mezera in 1975; a son, John Mezera in 2013; a brother, Edward Conway; and a sister, Ellen Conway.

Friends and relatives may call on the family on Wednesday at the church from 10 a.m. until the time of service.

Mass of Christian Burial for Emmeleen Mezera will be held on Wednesday, May 3, 2017 at 11 a.m. at Annunciation Catholic Church in Fox Lake with Fr. John Radetski officiating.


A special thank you to the staff at Golden Living Center in Randolph.


To order memorial trees or send flowers to the family in memory of Emmeleen Mezera, please visit our flower store.