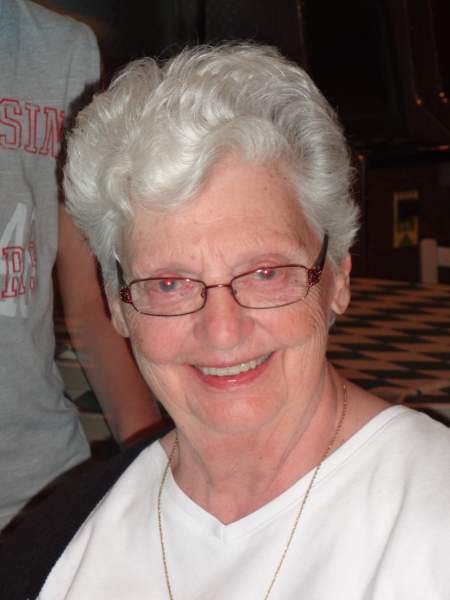 
Erma (Ermie) Jane (nee, Guenthner) Jahnke died Sunday, March 11, 2018 of complications of Parkinson's disease and has reunited with her husband Aaron and her dog Birdie, where they can now fish and walk the wooded trails of heaven with Al and Judy.

Ermie was born July 24, 1934 in an Antigo hospital in Langlade County to George and Bernadyn Guenthner.

Ermie was raised on a dairy farm outside of Antigo and loved all the kitties. She attended a one-room school house, Longfellow Grade School, and later she attended Antigo High School. Ermie attended Langlade Teacher’s College for two years where she met and later married Aaron Jahnke on July 25, 1953. Ermie lived with her grandma Guenthner for one year while Aaron finished school. She proudly taught grades 1-4 for one year in Shawano County. Ermie gave up teaching when her daughter Julie was born in Shawano. Ermie and Aaron moved to Hilbert, Wisconsin where her son Mark was born, and they lived there six years making good friends with Jack and Mona Sweere. In 1961 the couple built a home in Chilton, where her son Brian was born, and they lived there 4 years growing lasting friendships with their neighbors, especially Helen and Cliff Schaubs. In 1965 Ermie and her family moved to Waupun and in 1968 her son Matthew was born.

Ermie loved working as a waitress at supper clubs like the 49er in Hilbert, Helbing’s in Beaver Dam, Johnny Van’s and 151 Club in Waupun. Later in life, Ermie happily worked at Roberta’s Fashion Boutique in Waupun, where she continued to make lasting friendships. In 1994, Ermie and Aaron built their “place” up north. It was here that they would “unwind” and have lots of fun. Ermie could fish all day, she loved to snowmobile, cook on the fire, take walks and play cards laughing late into the night.

Ermie will be remembered as a fun-loving happy wife, mother, sister, and neighbor. She made friends with so many good people and will not be forgotten by anyone. Getting together with friends, going out to eat and always keeping in close touch, often through letter writing, was very important to Ermie.

Ermie was preceded in death by her husband Aaron in July of 2001, and her dearest sister and friend, Judy (Guenthner) Adams in July of 2017 and her brother-in-law Albert Adams in January of 2007.

The family thanks the caregivers especially Hope McCurry at Prairie Ridge, where mom lived from January of 2012 until the time of her death. Also a heartfelt appreciation and gratitude is extended to the Generations Hospice, all of whom tenderly cared for her since 2016.

Friends and relatives of Ermie Jahnke may call on the family on Wednesday from 3 p.m. until the time of service.

A Memorial Service and celebration of Ermie Jahnke will be held on Wednesday, March 14, 2018 at 6 p.m. at Werner-Harmsen Funeral Home in Waupun with Rev. Ken Loehrke officiating.


The family requests memorials may be made out to the Waupun Animal Shelter.


To order memorial trees or send flowers to the family in memory of Ermie Jahnke, please visit our flower store.