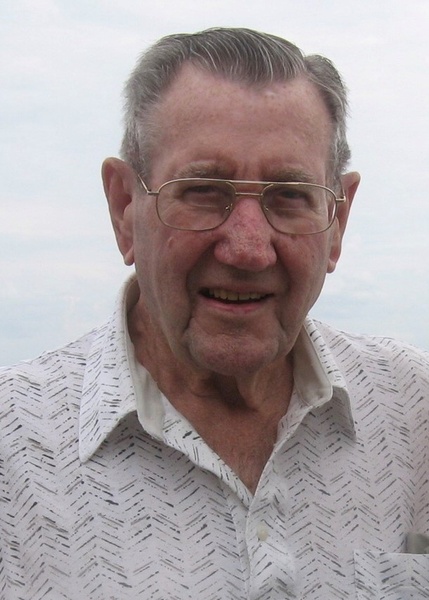 Ewald was born April 23, 1922 in Chester, WI the son of Gottfried and Anna Zurbuchen. Ewald worked on the family farm and cheese factory before entering the military on November 3, 1942 and serving in the U.S. Army until November 1, 1945. On February 15, 1944 he married Florence (Vant Hoff) Zurbuchen in Paris, TX. Ewald (T/5) was a member of Troop E of the 32nd Cavalry Reconnaissance Squadron with training in Camp Maxey, Texas. He drove truck and half track while serving in campaigns in Central Europe, Rhineland, Ardennes, and the Aleutians. He served under General Patton. He fought in the Battle of the Bulge and defended the famous Ludendorff Bridge at Remagen, the last bridge over the Rhine River.

Ewald was employed at Fond du Lac County Highway Commission for 19 years where he retired January 30, 1987. His career also included owning and operating his own farm and cheese factory, Tustin Star Cheese Factory near Poy Sippi, WI. He worked as a cheesemaker with Alto Cheese in Alto, WI. He was a member of Emmanuel Reformed Church and served as an Elder and Deacon. He enjoyed taking his grandchildren to Wisconsin Dells and collecting walnuts.

In 1989, he and Florence retired to Bradenton, FL to be near their daughter Barbara Doan and family. He worked part time for Avis Rental Cars transporting vehicles to various airports along the west coast and in central Florida. He was a member of the Bradenton Christian Reformed Church. He and Florence were regulars at the Cortez Cafe where everyone new them and the staff were like family.

Ewald was soft-spoken and a man of few words but was full of wisdom and relied on his faith. He treasured and loved his family. He spent his time relaxing with his family and enjoyed boating, gardening, observing wildlife, and watching baseball.

Friends and relatives of Ewald Zurbuchen may call on the family on Thursday at the church from 9:30 a.m. until the time of service.

Funeral services for Ewald Zurbuchen will be held Thursday, July 6, 2017 at 10:30 a.m. at Emmanuel Reformed Church in Waupun with Rev. John Tilstra officiating.

Memorials may be made to Forest Mound Cemetery P.O. Box 88 Waupun WI 53963 for upkeep of the veteran’s memorial.


To order memorial trees or send flowers to the family in memory of Ewald Zurbuchen, please visit our flower store.