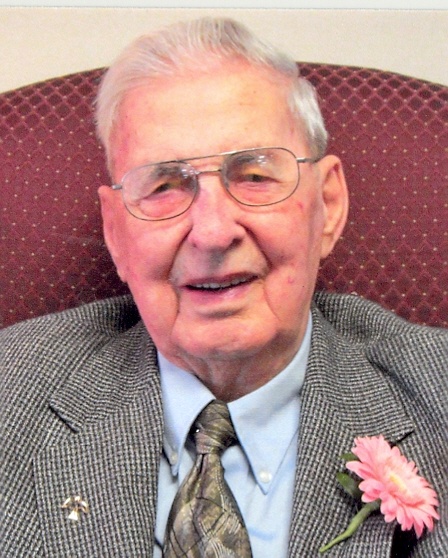 
Floyd was born November 4, 1921 in Green Lake County near Fairwater, the son of Oscar and Alma Ferch Daane. On February 16, 1943 he married Dorothy Ter Beest at her parents’ home near Alto in Fond du Lac County. Following their marriage the couple resided in Brandon most of their married lives. Floyd owned and operated a trucking business in which he hauled livestock and carried milk. In later years he drove truck for Bird Trucking of Waupun and also Carnation Company of Waupun where he retired in 1982. Following his retirement, he found great pleasure in working with his son, Ron, on his farm. Floyd was a member of Bethel Reformed Church in Brandon where he served as deacon and elder over a period of 24 years. Floyd also taught Adult Sunday School for 20 years.

Floyd was preceded in death by his wife, Dorothy in 2010; a brother; two sisters; 11 brothers-in-law; and five sisters-in-law.


Friends and relatives may call on the family on Friday at Werner-Harmsen Funeral Home in Waupun from 4-7 p.m. and on Saturday at the church from 10 a.m. until the time of service.


Funeral services for Floyd Daane will be held Saturday, October 18, 2014 at 11 a.m. at Bethel Reformed Church in Brandon with Rev. John Tilstra officiating.


To order memorial trees or send flowers to the family in memory of Floyd Daane, please visit our flower store.