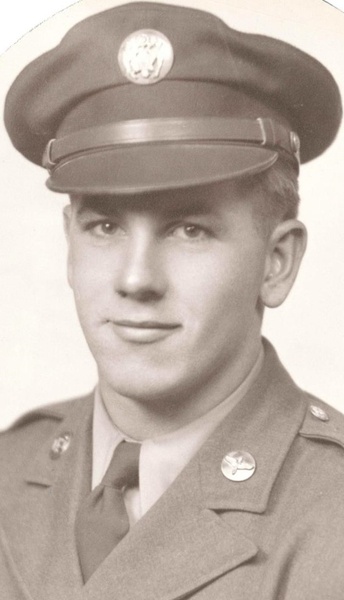 Fred was born March 5, 1925 in the town of Burnett, the son of Gottfried and Anna Zurbuchen Zurbuchen. On October 27, 1945 he married Betty Lidtke in Trenton, NJ. Fred served his county in WWII with the Army Air Corps for four years. He was in the European Theater stationed in England with the 8th Air Force as a B17 Ball Turret Gunner and received the purple heart. Following his service with the military Fred was a cheesemaker for five years. Following that he was employed as a correctional officer for the Wisconsin Division of Corrections from which he retired. Fred was one of the founding individuals for Little League Baseball in Waupun. He was very involved in Pella Lutheran Church in Waupun and served as elder for many years and helped out with woodworking tasks for the church. Fred enjoyed traveling with his family to Switzerland, the homeland of his parents. He also traveled extensively with Betty and their children throughout the United States. He and the boys enjoyed hunting together. He was a life member of Veterans of Foreign Wars Post 6709 in Waupun and a member of Experimental Aircraft Association. To sum up Fred, he loved God, his family, and his country.

Fred was preceded in death by a granddaughter, Erica Zurbuchen, a sister; two brothers; and two sons-in-law, Jerry Pevonka and David Smith.

Friends and relatives may call on the family on Wednesday at the church from 9:30 a.m. until the time of service.

Funeral services for Fred Zurbuchen will be held Wednesday, July 10, 2019 at 11:30 a.m. at Pella Lutheran Church in Waupun with Rev. David Knuth officiating.

The family wishes to thank the staff at Lakeview Place and St. Agnes Hospice for their love and care.

Memorials may be directed to Pella Lutheran Church in Waupun.


To order memorial trees or send flowers to the family in memory of Fred Zurbuchen, please visit our flower store.