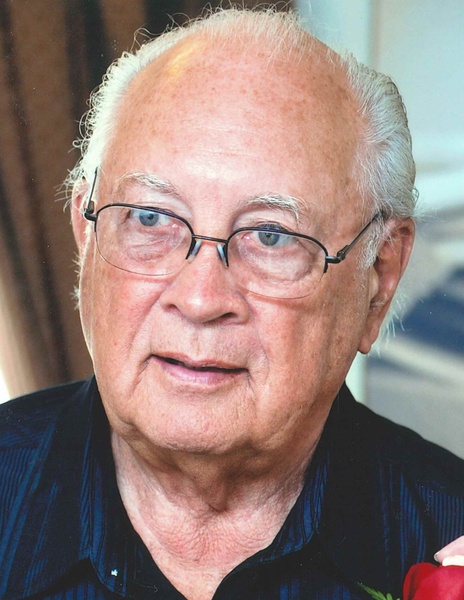 Gordy was born July 24, 1934 near Rush Lake, the son of Andrew and Lucille Pinnow Roeder. Gordy was a 1954 graduate of Waupun High School. He served two years in the National Guard and then served four years with the U.S. Marines where he attained the rank of Sergeant. On July 14, 1956 he married Shirley Schroeder in Oshkosh. The couple resided in Cherry Point, NC for a year and following his service duty returned to Waupun. Gordy worked for the Wisconsin Division of Corrections at Central State for 26 years, retiring in 1989. During his employment with the state, Gordy also had various side jobs. Our dad had a hat for every job he did.
He delivered milk for Roets Dairy, applied roofing, made windmills, and upon retirement worked for 25 years at Lawsonia Country Club in Green Lake. Gordy would tackle any job which was set before him. Gordy and Shirley were avid members of Rock River Country Club in Waupun for over 20 years. Gordy enjoyed hunting, fishing, and being around family. He had a “green thumb” when it came to gardening. He and Shirley enjoyed camping at Green Lake Campground for several years. Gordy was a member of Immanuel Lutheran Church in Waupun where he was baptized and confirmed.

Gordy was preceded in death by his parents; and a sister, Joan.

Friends and relatives may call on the family on Tuesday at Werner-Harmsen Funeral Home in Waupun from 4-7 p.m. and on Wednesday at the church from 9:30 a.m. until the time of service. American Legion Post 210 of Waupun will provide military honors.

Funeral services for Gordy Roeder will be held Wednesday, May 31, 2017 at 10:30 a.m. at Immanuel Lutheran Church in Waupun with Rev. Jeff Nicla officiating.

Burial will follow at Highland Memory Gardens in the town of Trenton. American Legion Post 210 of Waupun will provide military honors.


To order memorial trees or send flowers to the family in memory of Gordon "Gordy" Roeder, please visit our flower store.