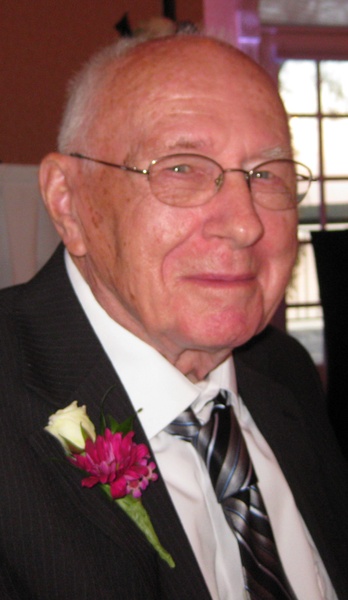 Harry was born March 25, 1927 in the town of Mackford, Green Lake County, the son of Fred and Minnie Biesenthal Mielke. Harry was a graduate of Waupun High School. On March 20, 1948 he married Joan Burroughs at the Church of Peace in Fond du Lac. Shortly after their marriage Harry was called to serve his country with the U.S. Army during the Korean War. Following his discharge from the military, Harry drove milk truck, became a carpenter, and worked in Waupun and Fond du Lac. For the last 30 years of employment he was employed with the U.S. Post Office in Waupun where he started out as a clerk and retired as its postmaster. Harry was a member of the Rotary Club and Rock River Country Club in Waupun where he enjoyed many rounds of golf. Harry was a member of Immanuel Lutheran Church in Waupun. Most importantly, he enjoyed spending time with his family and grandchildren whom he loved so very much.

Harry was preceded in death by his wife, Joan; a son-in-law, Keith Gilmore; a brother, Wilbur Mielke; and a sister, Mildred Miller.

Friends and relatives may call on the family on Thursday at the church from 10 a.m. until the time of service.

Funeral services for Harry Mielke will be held Thursday, August 2, 2018 at 11:30 a.m. at Immanuel Lutheran Church in Waupun with Rev. Jeff Nicla officiating.

A special thanks to the St. Francis Home in Fond du Lac for the special care given to Harry over the years.


To order memorial trees or send flowers to the family in memory of Harry Mielke, please visit our flower store.