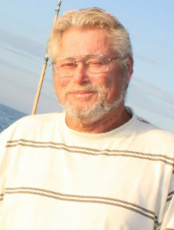 Harvey was born October 25, 1951, the son of Harvey and Duaine Dins Hoeft. He was a 1970 graduate of Waupun High School where he lettered in baseball. On December 16, 1976 he married Donna Dallman. The couple resided in Waupun all their married lives in the very home Harvey’s parents built. Harvey followed in his father’s footsteps and became a correctional officer and worked passionately at Dodge Correctional Institution for 13 years then felt a calling to become a union rep for the Wisconsin State Employees Union. He served his Union Brothers and Sisters for over two decades while working for AFSCME, Council 24 until he retired in 2009. During this time, he spent six months in Alaska and also in Iowa organizing unions for the correctional officers there. Harvey was an avid hunter and fisherman. In the summer, you’d find him hosting family, friends and those who simply shared in his love for fishing in Sheboygan, on Lake Michigan where he lived and skippered his boat, “The Marty Drew”. From fall through spring, he’d put his rods and reels away for hunting, building blinds, doing chores or just relaxing in the ‘Arizona Room’ at “The Farm”, the family’s homestead in Neshkoro. When Donna could talk him into a trip, they’d pack up the truck and dogs and slowly travel Route 66 ‘Out West’ taking in all the sights then onto Las Vegas where Harv would belly up to a craps table, always playing his family’s lucky numbers. In the early 2000’s Harvey spent many winter weekend days raising money via meat raffles to revive, then manage the men’s city baseball team that played at Schlieve Field on summer Sunday afternoons. Harv mentored many young men that played for him throughout the years, including his son, Mike.

Harvey was preceded in death by his parents and brother-in-law, Jerry Veleke.


Friends and relatives may call on the family on Tuesday at the funeral home from 4 p.m. until the time of service.

Funeral services for Harvey Hoeft will be held Tuesday, September 25, 2018 at 6:30 p.m. at Werner-Harmsen Funeral Home in Waupun.


To order memorial trees or send flowers to the family in memory of Harvey D. Hoeft, please visit our flower store.