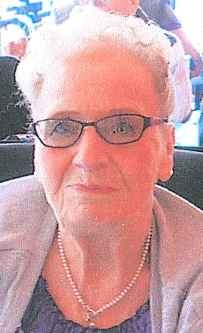 
Johanna was born March 10, 1937 in Bad Hersfeld, Germany, the daughter of William and Louise Kompel. Johanna married Fred Arriens in Germany while he was stationed there with the U.S. Army. In 1960 the couple moved to Waupun. During her employment years, Johanna was a custodian at the Waupun Middle School, and also worked with Home Care. Johanna was a member of Pella Lutheran Church and a past member of the Waupun Lioness Club.

Johanna was preceded in death by her parents; her husband, Fred Arriens; a daughter, Penny Arriens; and two brothers: August Kompel and Kurt Kompel.


Friends and relatives may call on the family on Monday at the Werner-Harmsen Funeral Home in Waupun from 5-7 p.m. and on Tuesday at the funeral home from 9:30 a.m. until the time of service.


Funeral services for Johanna Arriens will be held Tuesday, May 26, 2015 at 10:30 a.m. at Werner-Harmsen Funeral Home in Waupun with Rev. Kenneth Loehrke officiating.

To order memorial trees or send flowers to the family in memory of Johanna Arriens, please visit our flower store.