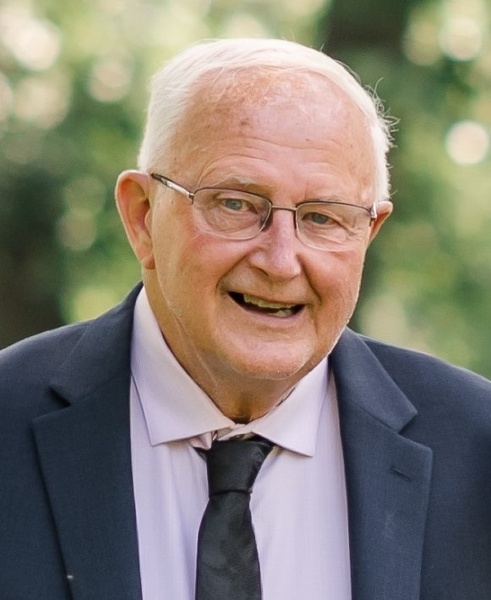 John was born August 2, 1936 to Sam and Martha Dykstra Smits. John attended Cambria High School and graduated in 1954. Following graduation, he joined the National Guard for 6 ½ years. In his early years, high school and after, John enjoyed playing baseball and softball. He was asked to try out for the Giants, but chose to farm with his father. On August 11, 1961 he married Marilyn Westra in Randolph, WI. While still on their honeymoon, John was called to report for active duty with the 32nd division out of Portage, WI to Fort Lewis, WA. Following his service, John was employed as a correctional officer at Waupun Correctional Institution. The day following his retirement at age 53 he had the privilege of working with his sons and grandsons at Double S Dairy where he worked for an additional 26 years. John was a dedicated and loving father, grandfather, and great-grandfather and took such joy in being a part of their lives. He fully enjoyed attending many, many sporting and musical events of the kids. John loved planning a good trip and he and Marilyn enjoyed many annual vacations with his sister-in-law and brother-in-law, Howard and Ev Minnema where they relished seeing the beauty of God’s creations and learning about the history of our nation. Although they traveled to many beautiful places, his favorite trip was in celebration of their 50th wedding anniversary where the entire Smits family (including children and grandchildren) went to Cancun, Mexico. Just as memorable were all the annual cottage vacations where all the kids and grandkids were always welcome. John was a friend and mentor to many. He was involved in Crossroads Prison Ministry for 12 years and also fully enjoyed the men’s bible study that met in their home. John also enjoyed the privilege of serving many terms on the Waupun Christian School board and as an elder and deacon at his home church of Bethel CRC in Waupun.

John was preceded in death by his parents, Sam and Martha Smits; his three sisters and brothers-in-law: Margaret (Gerben) Cupery, Katherine (Earl) Treptow, and Bernice (John) Visser; his father and mother-in-law, Andrew and Effie Westra; and two brothers-in-law, Andrew Jr. and Anthony Westra.

Friends and relatives may call on the family on Saturday at the church from 9 a.m. until the time of service. Covid-19 safety guidelines are encouraged.


Memorials may be directed to The Gideons or Crossroads Prison Ministries.


To order memorial trees or send flowers to the family in memory of John Smits, please visit our flower store.