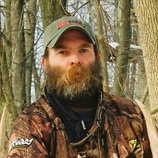 Born March 31, 1966 in Barrington, IL, Kory’s life was filled with struggles and triumphs, beginning with a two month stay in Children’s Memorial Hospital in Chicago as an infant. His strength of spirit and determination was forged early, and served him well throughout his very limited time here. Kory graduated from Barrington High School and then attended UW Whitewater on a wrestling scholarship, strengthening his connection to the state that would eventually become his home. He became a master tradesman – leaving his mark (literally) in homes throughout the Midwest. Kory studied Tae Kwon Do alongside his black belt brother Kurt, and was an MMA fighter when the sport first began. He always loved a good fight – probably because he usually won – and consequently, was a very sought after bouncer for many years. He lived to hunt, and hunted to live. Kory has held top spots on the Pope & Young Records and Boone & Crockett Club Records lists. His skill with a bow earned him sponsorships and guide opportunities, took him around the US and halfway around the world to New Zealand. He honored every animal that gave its life-force to strengthen his. His love of dogs was lifelong, and led to his most recent venture, HardKore Catahoulas, breeding and raising Louisiana Catahoula Leopard dogs. Kory was a tinker, a trader, a smart aleck, a Harley rider, a bear- hugger, an artist, a toe -cracker, a flea market fanatic like his father, and a deeply spiritual soul like his mother. His intimidating appearance covered a huge heart and a deep love for his family and close friends, who already miss him fiercely. His final act of tissue donation speaks volumes about his true character.

Kory was preceded in death by his mother, Rosemarie (Orlea) Lang on Dec. 4, 2014, and his father, Donald Lang on February 8, 2017. He is survived by his brother, Kurt Lang of Trego, Wis, his sister, Krisellen Lang of Williford, AR, his nieces Addison Schwaller of Oxford, OH and Blythe Schwaller of Decatur, IL and his nephews Carson Schwaller of DeKalb, IL and Drake Schwaller of Kansas City, MO. Kory also leaves behind his ‘woman’ and partner, Donna Konopka of Brandon, WI.

Cremation rites were accorded, as per Kory’s wishes, and a celebration of his life will be held at a later date.


Memorials may be directed to HardKore Catahoulas of Brandon, WI.

May you always be downwind now Budly,
may you have the eyes of the eagle,
may your arrows always fly true
and may GrandFather bless you beyond measure.


To order memorial trees or send flowers to the family in memory of Kory Andrew Lang, please visit our flower store.