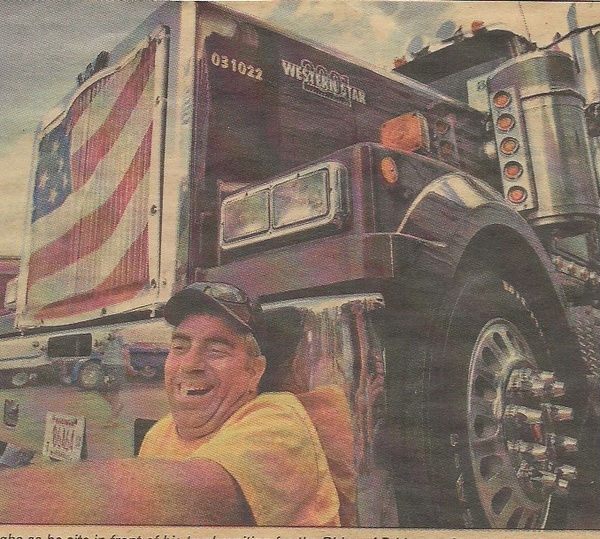 The world will miss his kindness, his generosity, most of his humor, and his booming laughter.

Mark was born on April 30 1955 in Ripon, WI. Being the oldest of 6 boys, Mark was always leading games of basketball, softball, football and wrestling matches that shook the plaster (much to our parent’s chagrin). Basketball was his favorite sport. He had the heart of a champion NBA player, but unfortunately lacked the height.

After graduating from Waupun High School in 1974, Mark joined the US Marine Corps with his brother Rick. During his service, he was stationed in the heat and humidity of Okinawa Japan, the desert training area in Twenty-Nine Palms CA and Camp Pendleton near San Diego CA attaining the rank of Corporal and commander of an Amtrac.

After completing his service, Mark returned to Waupun attending Moraine Park Technical College for Diesel Mechanics and Welding. This led him to the Diesel Driving School culminating in an almost 40 year career in trucking. Mark was very proud of his chosen career. He was a member of OOIDA (Owner Operator Independent Driver Association) and often assisted and always participated in the Waupun Truck Jamboree. Mark truly enjoyed the many friends that he made in his travels and business. Mark was always grateful for the support and guidance that he received from his friends.

Throughout his life, Mark was faithful to his family and friends. He was always present. He made himself available whether it was on our farm, to his friends and extended family or to Weeping Willow 4-H, and at the so many school events he attended. He rarely if ever missed his brother’s wrestling meets.

To this day, I can hear his booming voice cheering us on above the crowd. Mark will be greatly missed.

The World would be so much better if everyone emulated his kindness.

He leaves behind family: his brothers Rick (Fran), Luke, Matt (Cathy) and Chris (Ann); his nephew Dylan; and his nieces Claire, Elena, Camille and Corrine.

Mark was preceded in death by his parents Frank and Kay Kittell; and his brother Russell.


A celebration of life service will be announced at a later date.


A special thanks goes to the team of nurses, doctors, and staff of UW Hospital’s D6/5 and TLC units.


In lieu of flowers, please consider a donation in Mark’s name to Friends Of the Waupun Library or the Cystic Fibrosis Foundation.

To order memorial trees or send flowers to the family in memory of Mark Kittell, please visit our flower store.