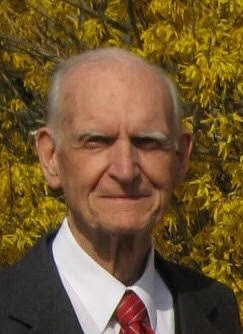 Pastor Zenker was born on March 4, 1931 and was baptized becoming a child of God on March 29, 1931. As a child he attended Calvary Lutheran Church in Thiensville, WI. He was confirmed in his faith April 2, 1944. “Put on the new man, which after God is created in righteousness and true holiness.” Ephesians 4:24. Also in 1944, he enrolled at Northwestern Prep in Watertown, WI, then attended Northwestern College, graduating in 1952. He spent the next four years at Wisconsin Lutheran Seminary in Mequon, graduating in 1956. He then spent two years as a tutor at Northwestern Prep.

From August 1958 to February 1960 he served the joint parishes of Salem, Woodbury, Minnesota and Mt. Zion, St Paul, Minnesota. He then served St. Andrew’s of St. Paul Park, Minnesota until June 1975. He then accepted a call to become pastor at St. Paul’s in Brownsville, Wisconsin. He retired in 1996 and moved to Waupun, WI.

The funeral services for Pastor Allen P. Zenker will be broadcasted Monday, May 18, 2020 at 11 a.m. on the facebook page of Grace Evangelical Lutheran Church in Waupun.

Memorial contributions can be directed to Grace Evangelical Lutheran Church in Waupun or Wisconsin Lutheran Seminary in Mequon.

To order memorial trees or send flowers to the family in memory of Pastor Allen P. Zenker, please visit our flower store.