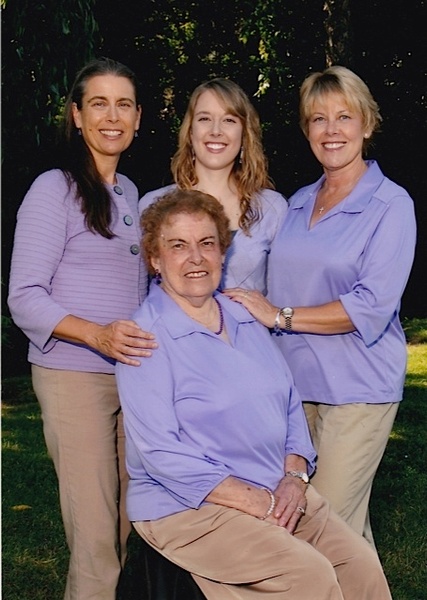 Ruth was born on July 24, 1921 in the town of Beaver Dam, Dodge County, the fourth of five daughters of Otto and Alma Heublein Dinkel in the farmhouse constructed by her father that still stands on Crystal Lake Road. Ruth was of the generation that went to a one-room country schoolhouse before heading into the city to complete her high school diploma with the Class of 1939 at the Beaver Dam High School. She remembered, with fondness, trips to school and town in the sleigh with “Pa at the reins.”

During the WWII years she was one of a legion of women who supported the efforts of our country through her work at a defense contracted shoe factory.

Shortly after her sweetheart returned from his tour of duty, they married. Ruth and Edward Brooks Redman joined together on the 14th of September 1946. In the early years, they resided in Milwaukee. For the rest of her married life, she resided in Waupun with her husband until his passing.

Ruth’s major focus was her family. She was proud to mother two girls who she raised with tender loving care. She was expert at preserving food through canning and freezing. She excelled at baking pies and cookies. At the Christmas holiday time she always had a cornucopia of sweets to choose from.

Her devotion to family included all in her and Ed’s extended family. She was always quick to act in service to help when there was a time of need. She did it humbly, as a true believer in the scriptures of her faith. Ruth was a member of Holy Trinity Episcopal Church in Waupun where she was active on the Altar Guild.

In 1967 Ruth began employment with the Waupun Area School District. For thirty years, she worked in food service where she rose to the position of head baker. The first twenty years were at Waupun High School while the last ten were at Jefferson Elementary School.

One of the greatest joys of Ruth’s life was to dance. The old pavilion in Fox Lake was a noted dance hall where the young people would dance the night away to the sounds of the big bands. Those memories stayed alive, as Ruth would twirl her daughters around the kitchen while doing dishes when a favorite polka song would come on the radio! After the girls left home, she and Eddie became regulars at the dances for the Don Peachey orchestra. What fun they had with their group of friends.

Another favorite pastime that Ruth enjoyed was playing cards socially. She participated in that from youth through her life at Prairie Ridge in Waupun. In her latest years, a big excitement was to take a bus trip to one of the various casinos in Wisconsin owned by Native Americans. Her one trip to Las Vegas was fun, but she preferred the casinos here better.

Ruth found a way to see the bright side of life and have fun while living. May all who pass through this realm have the joy of spirit as she had.

She was preceded in death by her husband, Edward Brooks Redman in 1988; three sisters: Helen Dinkel, Florence Dinkel and Marcella Feutz; and other family members.


Friends and relatives of Ruth Redman may call on the family on Saturday at the church from 10 a.m. until the time of service.


Inurnment will take place at Forest Mound Cemetery in Waupun.

The family would like to give a special thanks to all the staff at Generations Hospice and Prairie Ridge Assisted Living in Waupun for all their love, kindness and compassion shown to Ruth.

To order memorial trees or send flowers to the family in memory of Ruth K. Redman, please visit our flower store.