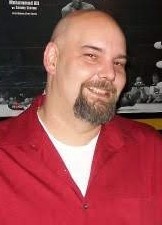 
Samual Joseph Chetto, best known for his sarcastic jokes and technical wizardry, passed away unexpectedly on June 20, 2019. He was 48 years old.

Sam was born on August 14, 1970, to Mike and Cindy (Dugan) Chetto. Sam and his younger sisters spent their childhood growing up in various locations throughout the U.S. His father was Chief Warrant Officer Rank 4 in the U.S. Coast Guard. Sam's favorite place growing up was Hawaii, where he was always eager to return. He graduated from the School of Hard Knocks at age 29 to serve in the US Navy, and started his DJ business, SS Homies Entertainment, in 2008. Upon his death, he was working as an over the road trucker.

Sam was a man of many varied tastes. He enjoyed a wide variety of ethnic foods: anything from Taco Bell to Taco Johns. He loved Hawaii, Wild Turkey, Harley Davidson Motorcycles, online gaming, stupid youtube videos, Trump memes, Bitstrips, the song “Shots,” and anything in poor taste that he thought could offend someone else.

Sam is also survived by many friends. He will be remembered by them as a great friend with a crude sense of humor, who would bend over backwards to help out whenever needed. He would be there to listen to them if they needed an ear, pick them up at bar close if they needed a ride, and open his doors if they needed a place to sleep. He has been described as “like family,” “a great man,” and even “a knight in shining armor.” I doubt his armor was all that shiny though, especially compared to his giant bald dome.

In honor of Sam, please make a donation to truckersfinalmile.org.


To order memorial trees or send flowers to the family in memory of Samual Chetto, please visit our flower store.