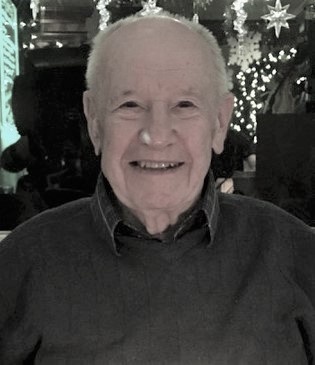 Thomas was born in Berlin on December 9, 1932 to George and Theresa Seaman Bella. He graduated from Berlin High School. From 1953 - 1957 Thomas served in the Air Force during the Korean War. Thomas proudly was among the veterans that participated in the Honor Flight of Wisconsin for Korean veterans. After his time in the service, Thomas returned to the States and became a police officer with the Berlin Police Department. He married Gloria June Buetow on November 22, 1953 and the couple moved to Waupun where he then worked as a correctional officer and armory officer at the Waupun Correctional Institution until his retirement. Thomas loved trap shooting and was an avid hunter with family and friends. He was a dedicated member of Pella Lutheran Church in Waupun.

Thomas is survived by Gloria, his wife of 62 years along with his two daughters, Dawn (James) Neevel and Dr. Deborah (Edward) Scuglik. He is survived by three grandchildren, Melissa Neevel (Joe Piekarski), Dustin (Courtney) Neevel, and Jennifer Scuglik (fiance Doug); and nieces and nephews.

He is preceded in death by his siblings, Richard Bella and Barbara Cluppert.

To order memorial trees or send flowers to the family in memory of Thomas Bella, please visit our flower store.